One Minus One is a singer-songwriter from Aachen, Germany. In his songs, he mixes elements of electronic dream pop nostalgia, melancholic reflections and explosive new wave bits. His music is quiet and powerful at the same time, counteracting the miseries of our times with hope and beauty.  He started playing under this name in 2010, having recorded numerous albums and played many gigs throughout central Europe and some in the United States so far.

Songs are never finished, they are composed to take a life of their own. Leaning onto this credo,
playing a live concert for One Minus One means communicating with all sorts of sound devices:
acoustic guitars, effect pedals, analogue synthesizers and loop pedals. The aim of this ongoing
interaction process is somewhat contradictory: keeping its results open as long as possible while
finding a suitable sound structure that lasts for a day or, maybe, a week. 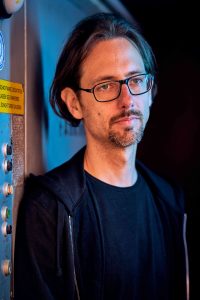 All of One Minus One’s recordings can be obtained through his DIY-netlabel Night Audit Music.